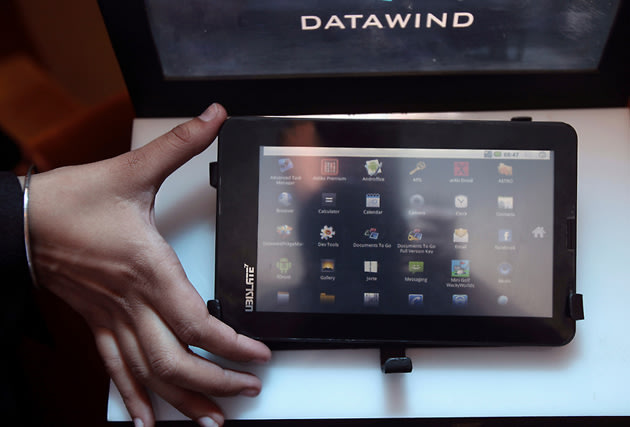 The Aakash is an Android tablet computer jointly developed by the London-based company DataWind with the Indian Institute of Technology Rajasthan and manufactured by the India-based company Quad, at a new production center in Hyderabad — under a trial run of 100,000 units. The tablet was officially launched as the Aakash in New Delhi on Oct 5, 2011. A substantially revised second generation model is projected for manufacture beginning in early 2012.

The seven-inch touch screen tablet features 256 megabytes of RAM, uses an ARM 11 processor with the Android 2.2 operating system, has two USB port and delivers HD-quality video. For applications, the Aakash will have access to Getjar, a proprietary market, rather than the Android Market.

As a multi-media platform, the Aakash project was beset by delays and setbacks. The device was developed as part of the country's aim to link 25,000 colleges and 400 universities in an e-learning program. Original projected as a "$35 laptop", the device will be sold to the Government of India at $50 and will be distributed at a government subsidized price of $35. A commercial version made in China will be marketed as the UbiSlate 7 at a projected price of $60.