UPSC has released the CDS 2 Exam 2012 Cut Off Marks, so that candidates can come to an idea about what could be the CDS 2 2013 Cut Off Mark. UPSC wil soon publish CDS 2 Results 2013 and Interview Dates at the official website www.upsc.gov.in. Click HERE to Download CDS II Cut Off Marks 2012 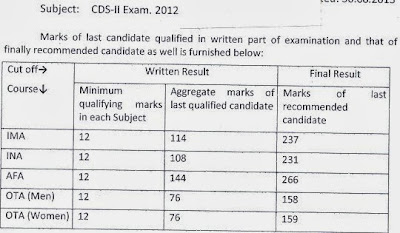 Email ThisBlogThis!Share to TwitterShare to FacebookShare to Pinterest
Labels: UPSC