DEECET 2014 Online Apply:
Candidates can apply for DEECET/DIETCET 2014 to be held on 15.06.2014. Candidates need to apply online from the official Deecet website http://dietcet.cgg.gov.in/ from 06.05.2014 to 18.05.2014.
The following steps must be followed in submission of DEECET Online Application Form.
Candidates have to download the ‘Information Bulletin’ from the DEECET website and they have to go through it carefully and satisfy their eligibility for appearing for DIETCET 2014.

Ensure that the signature is within the box. Scan the required size containing the photograph and signature. Please do not scan the complete page. The entire image consisting of photo along with signature is required to be scanned and stored in .jpeg format on local machine. Ensure that the size of the scanned image is not more than 50kb.

Complaints relating to mismatch of photograph and candidate details will not be accepted after submission of application at any cost.
Note: This was the procedure for Dietcet 2013. It is expected that the same procedure will be used for the dietcet 2014 also. This information will be updated as soon the official information bulletin is published.
Advertisement

DEECET 2014 Notification and schedule has been announced. DIETCET 2014/DEECET 2014 will be conducted for admissions into two year Diploma in Education (D.Ed) course in Government District Institutes of Educational Training (DIETs) and Private Elementary Teacher Training Institutions in the state to be conducted by Department of School Education, Government of Andhra Pradesh.

DEECET (Diploma in Elementary Education) will be replacing DIETCET. Until 2013, Dietcet had been conducted for admissions into D.Ed courses. But from the academic year 2014-2016, instead of Dietcet, DEECET has been introduced. The same syllabus will likely be used for this year Deecet.
Dietcet/DEECET 2014 Schedule:
Educational Qualifications (Dietcet/DEECET 2014 Eligibility)
1. Candidate who passed or appeared for the 10+2 Examinations (qualifying examination) March-2014 or its equivalent are eligible to appear for the entrance test. But they should have passed the qualifying examination by the time of admission.
2. Candidate should have secured 45 percent of marks in aggregate in qualifying examination. The minimum percentage of marks in the case of Scheduled Caste, Scheduled Tribe and Physically Challenged candidates shall however be 40 percent
Note: The above information is taken from the Dietcet 2013 information bulletin. The same procedure will likely be implemented this year too. However candidates are requested to check with the official information bulletin.
Advertisement

ELECTIONS – General/Bye Elections to House of People and Andhra Pradesh Legislature (Assembly and Council) - Sanction of Special Casual Leave to the Presiding Officers and Assistant Presiding Officers on the next day of poll – Orders - Issued.

ORDER:
2. Government, after careful examination of the matter, have decided to accept the said request.

5. All the Departments of Secretariat / Heads of Departments / District Election Officers are requested to communicate these instructions to all concerned, particularly, the leave sanctioning authorities of the Presiding Officers and Assistant Presiding Officers from which Department / Office they have been drafted for the election duty, for taking further action
Click HERE to download the G.O copy for more information
Advertisement

1.In addition to the recruitment of regular employees, Government has also been according permission to various departments for engaging personnel on contract/ outsourcing basis to meet the short-term manpower requirements in their establishments. Detailed instructions were issued in the G.O. first read above laying down certain norms relating to the appointment and the remuneration payable and other terms and conditions of contract and outsourcing.

2.As per the above instructions all departments are required to obtain approval of the Finance Department for engaging the services of any individual either on contract or outsourcing basis. As these arrangements are intended for meeting the short-term requirements, it is necessary to review the need for continuation of such personnel periodically. However, contrary to the above instructions certain departments have made engaged the services of individuals on contract and outsourcing basis without obtaining prior approval of the Finance Department and sometimes without following any due process and compliance with the Constitutional and statutory provisions.

3.Notwithstanding these shortcomings, the Government had issued a general order continuing the services of persons working on contractual and outsourcing on humanitarian considerations until March 31, 2014, vide Finance Department Circular Memo No.6522-A/417/A1/SMPC.II/2013, dt.13.09.2013. This extension was granted to all posts that were reviewed and cleared by the Finance department. However, the granted therein was not extended to the cases where the initial appointment was not done with the Finance department’ concurrence.

5.Accordingly, Government hereby order that the services of those persons working on contract / outsourced basis on March 31, 2014, with the prior approval of the Finance Department, is hereby extended upto June 30, 2014, subject to the following conditions:

i) The renewal of contract / outsourcing engagement for the period between April 01 and June 30, 2014 should be on the existing terms & conditions and no revision shall be done under any circumstance.

ii) This extension is limited to those working on March 31, 2014, in the posts and with the terms and conditions approved by the Finance Department.

iii) Instructions/guidelines of the Government with reference to outsourcing/ contract performance be followed scrupulously.

iv) These orders do not confer any right on any functionary for continuance after bifurcation of the state on June 02, 2014.

6. The actual number of employees, category wise and unit wise to be allocated to the successor states of Telangana and Andhra Pradesh will be issued in due course in consultation with the Departments concerned.

7. All the Secretariat Departments shall collect the data relating to all the Heads of Departments and the autonomous institutions and other entities and prepare the lists for each state separately and furnish to this department latest by April 30, 2014. The information has to be furnished in the form of an excel sheet in the proforma enclosed and emailed to mpa1finance@gmail.com.

8. All the Departments of Secretariat and all Heads of Departments are requested to take further necessary action
Click HERE to Download the G.O Copy for complete information
Advertisement

G.O Ms.No.78 Date 07.04.2014. AP Govt Salaries/Pension Paid on 24.04.2014. Pension, Salaries on 24th April 2014.
Government of Andhra Pradesh.
SALARIES – Payment of Salaries to the State Government Employees and Pensions to the Pensioners on 24.05.2004 – Orders – Issued
FINANCE (TFR) DEPARTMENT, G.O Ms.No.78 Date 07.04.2014.
Read the following:-
From the Director of Treasuries and Accounts, A.P. Hyderabad letter Rc.No.M3/3806/2014, dated 02.04.2014
ORDER
In the reference read above, the Director of Treasuries and Accounts, A.P. Hyderabad has informed that in view of re-organisation, the Government transactions related to combined A.P. State should be closed prior to scheduled date. The responsibility of payment of salaries and pensions for the month of May, 2014 lies with combined A.P. State. Normally salaries and pensions will be paid on 1st of succeeding month and the compilation and rendering of accounts to Accountant General will be completed by 15th of succeeding month.
To facilitate smooth rendering of accounts, orders for advancement of date of salary and pensions payment for the month of May, 2014, as a special case may be issued. All Heads of Department may also be informed to rationalize or restrict presentation of contingent bills during May, 2014 to smoothen the disbursement issues. In view of the above, she has informed that the payment of salaries and pensions for the month of May, 2014 may be permitted to be paid in the Month of May itself i.e. on 24th May, 2014 so that the monthly account processing work can be expedited.

The Government transactions related to combined A.P. State, arising on or after appointed day may also be settled through interstate suspense account maintained by the Accountant General. Therefore she has requested the Government to issue necessary orders in this regard.

Government after careful consideration of the matter, hereby decided to pay the Salaries to the State Government Employees and Pensions to the Pensioners for the month of May 2014 on 24.05.2014 instead of 02.06.2014 in view of the Public Holiday on 01.06.2014 and also in view of appointed date being 2nd June 2014 for formation of Telangana State.

The Director of Treasuries and Accounts, A.P., Hyderabad and the Pay and Accounts Officer, Hyderabad shall comply with the above orders for payment of salaries to the Government Employees and Pensions to the Pensioners on 24.05.2014 instead of 02.06.2014 for the month of May, 2014. They are also instructed to issue suitable instructions to their subordinate officers in this regard.
Advertisement

Email ThisBlogThis!Share to TwitterShare to FacebookShare to Pinterest
Labels: Tamilnadu

ORDER:
Government hereby direct that the following orders, wherein certain financial authorizations and allowances were given to the poll personnel shall hold good for the purpose of conduct of General Elections, 2014 Simultaneous Elections to the Lok Sabha and State Legislative Assembly to be held in two phases i.e., on 30-04-2014 & 07-05-2014 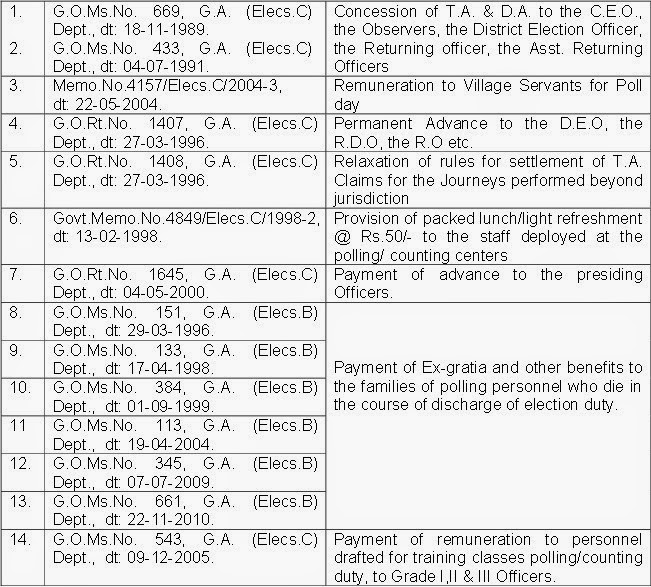 G.O Rt.No.564 Dated 03.04.2014. MPTC ZPTC Election Remuneration Rates. MPTC ZPTC Election Zonal Officer, R.O/P.O/A.P.O/O.P.O/P.P Remuneration Rates. Election Duty Remuneration Rate
ELECTIONS-4th Ordinary Elections to MPTCs/ZPTCs-2014-Payment of TA/DA/Remuneration to polling and counting personnel drafted on election duty to MPTCs/ZPTCs-Orders-Issued.
PANCHAYAT RAJ AND RURAL DEVELOPMENT(E&R)DEPARTMENT, G.O.Rt.No. 564, Dated 03.04.2014
Read the following:
1. G.O.Ms.No.1077,PR&RD(E&R)Dept.,Dated; 1.7.2013
2.  G.O.Rt.No.436,MA&UD(Elec.I)Dept., Dated:24.03.2014
3. From the Secretary, State Election Commission, Sec’bad Lr.No.609/SEC-B1/2014 Dated 26.03.2014
4. From the Commissioner, Panchayat Raj and Rural Employment, Hyd., Lr.No. Lr.No.3366/Elec./2014
Dt:27.03.2014.
5. From the President APUTF, representation dated 28.03.2014.
6. Election Commission of India Letter No.464/INST-PAY/2014-EPS, dated:28.02.2014.
ORDER:
In the reference 1st read above orders were issued for payment of TA/DA/Remuneration to the polling personnel drafted for the purpose of 4th Ordinary Elections to Panchayat Raj Institutions-2013.
2. In the reference 2nd read above orders were issued for payment of remuneration to the polling and counting personnel drafted on election duty to the 4th Ordinary elections to urban local Bodies.
3. In the reference 3rd &4th read above, the Secretary, State Election Commission, Secunderabad and Commissioner of Panchayat Raj & Rural Employment have requested the Government to revise the rates of TA/DA/remuneration payable to the personnel engaged for MPTC/ZPTCs elections in the State.
4. Government after careful examination of the above proposal and in modification of the orders issued in G.O 1st read above, hereby order fixing the following rates of TA /DA/ remuneration payable to the personnel drafted on training classes/polling/counting duties during 4th Ordinary elections to MPTC/ZPTCs-2014.

Email ThisBlogThis!Share to TwitterShare to FacebookShare to Pinterest
Labels: G.O's

Email ThisBlogThis!Share to TwitterShare to FacebookShare to Pinterest
Labels: Elections 2014

SMS based BLO Information. SMS 9212357123 for Booth Level Officer Information. UP Elections BLO Information by SMS
The Chief Electoral Officer, Uttar Pradesh (CEOUP) has started an SMS based program to identify booth level officer information and polling station details. Registered voters have to send an SMS from their mobile phone to find who is their BLO and their Polling Station Name, Date of Poll. Voter have send SMS to 9212357123 to avail this service in the following manner. 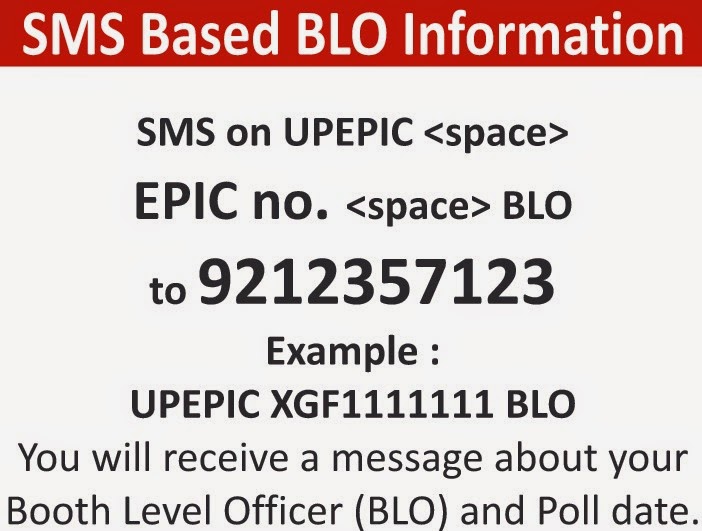 UPEPIC<space>EPIC No.<space>BLO.
Voter have to Type UPEPIC then space, then they have to enter their EPIC No. (Electronic Photo Identification Number), then space then they have to type BLO as shown above. They need to send this SMS to 9212357123. After sending they will receive their BLO information and polling booth information also on to their mobile phone.

Email ThisBlogThis!Share to TwitterShare to FacebookShare to Pinterest
Labels: Elections 2014

Government of Kerala G.O Ms.No.83/2014/GAD, Dated 31.03.2014. Holiday on 10.04.2014. Haryana, Kerala Holiday on 10th April 2014 due to Elections. Election Paid Holiday. section 135 B.
Govt of Kerala, General Administration department- General Elections to Lok Sabha 2014 - Day of Poll - Declaration of Holiday on 10th April 2014 to the public offices and other institutions - Orders issued.
Haryana Govt has also declared holiday for elections on this same day.