AP Inter 2nd Year Results 2014 will be declared tomorrow by 10am. Inter 2nd year results with marks will be published in the official website http://results.cgg.gov.in. Few days back first year results were announced by the AP State Government. About 10 Lakh candidates all over Andhra Pradesh have attended to Intermediate 2nd year examinations this year. Inter exams were held in the month of March 2014.


Board of Intermediate education has released Inter 1st year results, in which 55% pass percentage has been recorded. Inter 2nd year results with marks will be announced and Marks Memos will be send to the candidates. Usually every year Girls are securing high pass parentage. Inter advanced supplementary exams will be conducted from 25th of May 2014 for the candidates who fail in these examinations. Advanced supplementary examinations time table has also been announced recently. Candidates who have secured less marks can also apply for betterment/improvement. For this, they have to apply before 6th May 2014. Advanced supplementary exams results are expected to arrive in the month of July. 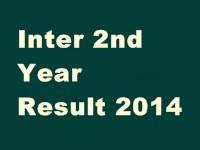 BIEAP (Board of Intermediate Education, Andhra Pradesh) has conducted First and Second Year Inter Exams from 12th March 2014 to 1st April 2014. Inter 1st year and 2nd year results will be available to download from the board of intermediate education official website http://results.cgg.gov.in