AP DSC 2014 Notification will be issued today 5th September 2014 by the AP State Government. DSC 2014 Notification will be released for 12803 Posts in Andhra Pradesh. Two separate notifications will come up for both states. AP State Cabinet has already met and announced that DSC Notification would be issued shortly. Its a very good news for the unemployed youth in Andhra Pradesh. Last time, in December 2012 Teacher posts have been recruited through DSC 2012 in the united Andhra Pradesh. This time, in 2014 Teachers will be appointed directly into the time scales which is prescribed for them. No need to work under consolidated pay system. Secondary Grade Teachers will be appointed at Rs10900 basic pay while school assistants will be appointed at Rs14860 basic pay. Teachers got good hike in salaries from the last PRC 2008. Their pay scales enhanced significantly. That is why now a days we are seeing much compitation for Teacher posts especially for school assistants. 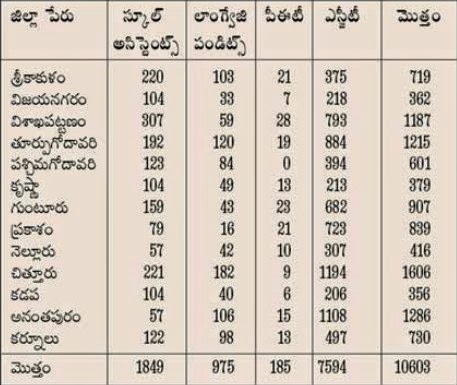