Engagement of Guest Teachers is done Distrktwise. Subject-wise vacancies in each District are enclosed below. However, the number of vacancies is tentative and is subject to change. Department reserves the right to alter the number of vacancies at any time, Directorate of Education will maintain a wait list I panel of candidates to meet any requirement in the Current Academic Year.

Willing candidates may register themselves with anyone District of choice online on our website www.edudel.nic in from 30.07.2014 (11.00 AM) to 07.08.2014 (UPTO 6 PM). Submission of applications other than online shall not be entertained and any deviation in this regard shall lead to summary rejection. Applicants are strictly instructed not to send any hard copy of the application to this department.

Post based district-wise order of merit list will be prepared on the basis of academic merit separately for each category of applicants namely SC/ST/OBC/Disabled persons and others.

Click the below official notification to know more about district wise vacancies, subject wise vacancies and other important details
Director of Education-Delhi-Guest-Teacher-Recruitment-Notification-2014
Advertisement

Email ThisBlogThis!Share to TwitterShare to FacebookShare to Pinterest
Labels: Recruitments

ORDER:
In the reference second read above, the Ministry of Rural Development, Government of India have notified the wage rate for unskilled manual work taken up under MGNREGS as Rs.169/-per day w.e.f. from 01.04.2014.

3. Government after careful examination of the matter and in super-session of the orders issued vide the reference first read above, hereby enhance the wages for unskilled manual works taken up under MGNREGS from Rs.149/- to Rs.169/- per day, w.e.f. 01.04.2014 as per the Gazette Notification of the Ministry of Rural Development, Government of India in the reference second read above, and also revise the Rural Standard Schedule of Rates (RSSR) for the financial year 2014-15 in consonance with different categories of works taken up under MGNREGS, in terms of para-7 of MGNREG Act, 2005, as detailed in the Annexure to this order.

ORDER
Government after careful consideration of the matter hereby decided to pay the salaries to the State Government Employees for the month of July’ 2014 in advance i.e., on 25th July 2014 instead of 1st August 2014 to enable the employees to celebrate the Ramzan Festival on 29th or 30th July2014.

AP State Govt G.O Rt No.2676 Dated 23.07.2014. Lifting of Ban on Promotions and Appointments.
A.P. Reorganization Act, 2014 - Ban imposed on all promotions, appointments, transfers, revision of seniority and change in terms and conditions of employment - Lifting of ban to the extent of promotions & appointments (including compassionate) at District level – Orders – Issued

3. Government observe that the re-organization may not cause any dislocation to categories of employees whose unit of appointment are District/Sub District level (local cadre of District). Local cadre of District will automatically stand allocated to respective district within the geographic
boundaries of Residuary State of Andhra Pradesh. Since the local cadre with District/Sub-District will not be affected in the process of allocation of employees due to re-organization.

4. Government, after careful examination of the issue, hereby relax the condition 7(b) of G.O.1st read above in respect of employees whose unit of appointment is District level to the extent of promotions & appointments (including compassionate) at District level.
Advertisement

Candidates have to apply online on or before the last date for filling up of application form. Last date is 10th August 2014. Remaining details are available at the official website www.scertorissa.org or www.scertodisha.nic.in.

Email ThisBlogThis!Share to TwitterShare to FacebookShare to Pinterest
Labels: UP, UP Teachers 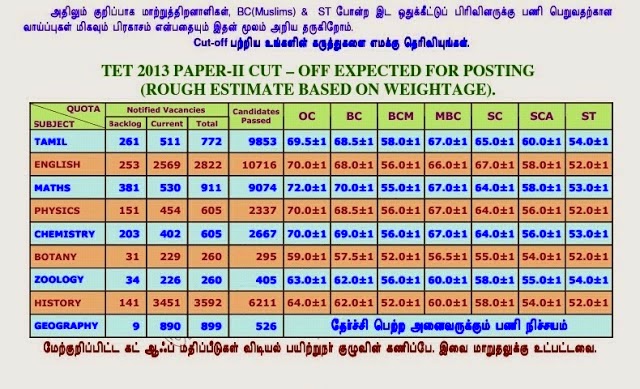 The above picture shows an expected cut off only. Its not official. It was calculated based on the weightage.
Source: www.teachertn.com

Email ThisBlogThis!Share to TwitterShare to FacebookShare to Pinterest
Labels: 72825, UP, UP Basic Board, UP Teachers

SCERT, Kerala will soon be publishing higher secondary plus one text books. Teachers can download the HSE Plus one Text books online from the official website http://www.scert.kerala.gov.in. Reference pages for Computer Applications, English, Malayalam Text Books have been uploaded online, teachers can use these resources before they got uploaded by the official sources.
SCERT has uploaded Standard 1 to standard 7 all subjects text books online. Teaches can download these books from the Kerala SCERT website.
Computer Applications Syllabus and Contents
English Syllabus and Contents
Malayalam Syllabus and Contents
Source: www.hsslive.blogspot.in

Notification for Direct Recruitment of B.T. Assistants (Tamil, English, Maths, Physics, Chemistry, Botany, Zoology, History, Geography) under Tamil Nadu School Educational Subordinate Service for the vacancies forwarded by the User Departments. It has been decided to fill the following vacancies of B.T. Assistants from the candidates who have been qualified in the Tamil Nadu Teachers Eligibility Test (TNTET) Paper 2 Examination conducted in 2012, 2013 and Special TNTET 2014.
1. Details of Vacancies ( Subject-wise and Community-wise): Department of School Education

How to apply: With the academic year 2014-2015 having commenced already, the Recruitment process has to be finalized at the earliest. In this context, the Teachers Recruitment Board has decided to accept the option of willingness to join Government Service, already submitted by the candidates at the time of certificate verification of TNTET-2012 & 2013, as application for the post of B.T Assistant in the subject concerned. Therefore, all the candidates who have appeared for certificate verification need not apply again for the above said B.T. Assistant post separately.

The details of candidates (Name, Post (subject) applied for, Date of Birth, Percentage of Marks secured in HSC, UG degree, B.Ed, TNTET, Weightage Marks awarded as per G.O.Ms.No.71, School Education (TRB) Department, Dated 30.05.2014, Community, Reservation claimed for Tamil Medium studies and Reservation claimed for Differently Abled category)
(i) who have passed TNTET – 2012 but were not selected for any Government post previously
(ii) those who have participated in Certificate Verification process of TNTET-2013 and
(iii) those who have participated in certificate verification process of Special TNTET 2014 is being published in the TRB official website http://www.trb.tn.nic.in. The candidates are advised to verify their details given therein
TNTRB B.T Assistants Direct Recruitment Notification 2012-2013
TNTRB
Advertisement 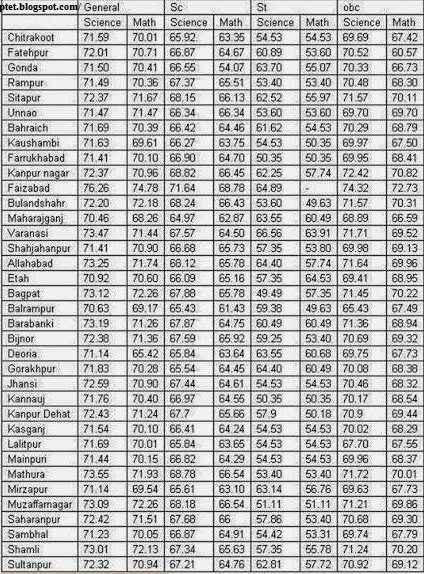 UP 29334 Junior High School Science, Maths Teachers counselling will likely be held from the 7th of July 2014 and 8th July 2014. More information can be found at the UP Basic Education Board official website http://upbasiceduboard.gov.in

AP State Government Circular Memo No.654/Poll.A(3)/2004, Dated 21.06.2014. 1 Hour Permission for Muslim Employees.
AP State Government has issued a circular Memo No.654, Dated 21.06.2014 for permission to all the employees belonging to Muslim religion including teachers and out sourcing employees to leave offices and school early by an hour during the Ramzan month from 30th June 2014 to 28th July 2014. Employees and Teachers can leave Offices/Schools by 4pm on the eve of Ramzan.