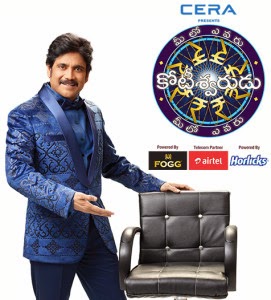 MEK 2nd Season will soon be started. Nagarjuna did not announce the exact Date/Schedule of the MEK 2nd Season. But as the program gets huge TRP Ratings and as many as 11,00,000 people shown interest in the MEK Game Show and lot of people are interested to participate in this game show for the second season also. Meelo Evaru Koteeswarudu 2nd season will start in the coming months.

Any person(s) who participates in the Competition and who
(i) is above eighteen (18) years of age as on April 24, 2014;
(ii) is a citizen of India residing in India
(iii)is of sound mind and health and
(iv) enters the Competition in accordance with the Rules and Regulations stated below.

Employees of MTNL, of the Producer, of the advertising agency which has been appointed from time to time, and also employees of the sponsors; and members of their immediate family; persons other than Indian nationals, or Indian nationals living out of India, or those who do not qualify under the definition of resident of India as per the Income Tax Act, 1961 or those not conversant in spoken Telugu, are ineligible to enter the Competition.